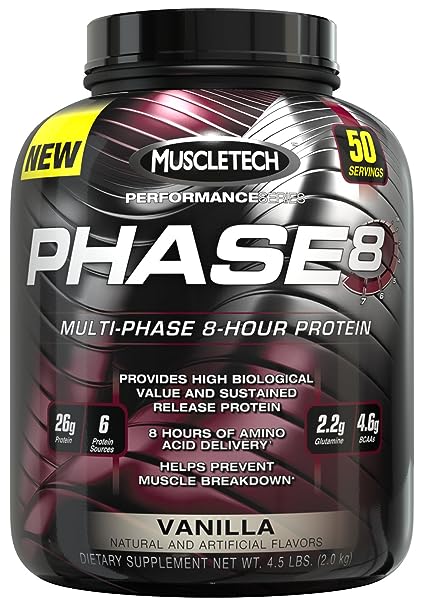 The Phase8 Sustained Release Protein is one of the best protein products in the market. It has a great reputation because it does its job very well. The sustained-release function is obviously a key element to the success with the product. It is a bit different from most other protein products, and it’s something I want to delve a bit further into. I also want to talk a bit about the contents as that is one of the things that as well set it apart from its competitors. The taste is considered best-in-class, at least that’s what their marketing material says and that is certainly also something to look at. Finally, it is worth taking another look at what results you can expect from the product. After all that’s, what you really want to know about isn’t it? I have high hopes that when you’re done reading this review, you will find yourself better equipped to making a purchase decision. To be totally honest the protein supplement market can be a bit of a jungle, and if I can do anything at all to help you out that is something I’d love to do.

The key element of the Phase8 Sustained Release Protein is that it uses different sources of protein. You will notice the sustained-release part of the label. What it means is that you will get a steady release of protein over several hours. Most products just give you a quick boost, and that’s it. Protein is obviously important to your training. It is what your muscles are made of. However, if all the protein in your supplement is released at once you can’t be sure you’re getting the full benefit.

As mentioned Phase8 Sustained Release Protein uses six high-quality protein sources. You get 26 grams of protein. And because it uses high-quality milk, you get half as many carbs and fat as you would with other leading products. I always like to look at what exactly I get with my supplement. I’m trying to build muscle and doing that means I’m fairly adverse to the idea of adding a lot of carbs and fat to my system.

The label of Phase8 Sustained Release Protein claims to have a Best-in-Class taste. I haven’t’ tried every supplement on the market, so I can’t say. I also think something like that has a lot to do with personal preference so in my opinion a statement like that is utter bullshit. However, I do like the taste. It’s not synthetic like a lot of other supplements. I don’t put taste that high on my list of priorities, but I do consider it a huge bonus.

The key thing to any supplement is how well it does it’s job. In case you’d forgotten with all this talk of taste and ingredients the single purpose of a protein supplement is to help you build muscle mass. It is the first question you need to ask of any product. Phase8 Sustained Release Protein does a great job of doing this. That’s the primary reason I recommend the product.