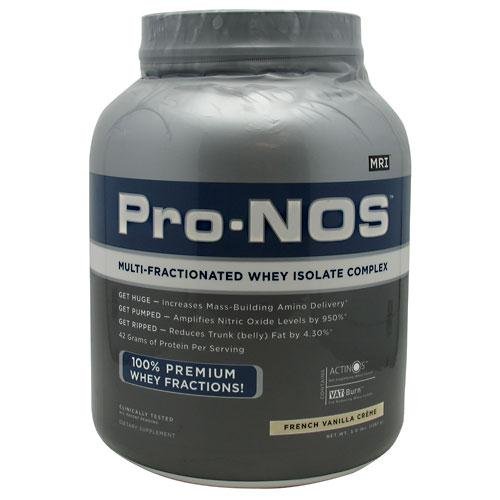 There are some really bold claims on the M.R.I. Pro-NOS package. Words like revolutionary, physique-altering and breakthrough get thrown around. I have to be honest with you. Claims like that kind get me on the edge. I almost don’t want to test it based just on that. It’s not that I think people in marketing are liars. It’s just that I often doubt their credibility. They were hardly going to tell you if the product stank right? Well, since I’ve been running fairly thorough tests of all the protein products on the market that get good rankings I felt I had to overcome my fear of marketing people and give it a spin. Now, you’re wondering if it was indeed all of those things. If you want to know you have to keep reading.

Firstly, let’s talk proteins. Proteins are what your muscles are made off. It is what makes them stronger. It’s the building blocks. This is why it has been common knowledge for decades that in order to increase your muscle mass you would need more protein. There’s nothing new or revolutionary about that. Does the M.R.I. Pro-NOS supplement check the protein included box? It certainly does. Does it help you increase your muscle mass? Most definitely. In that sense, it does everything it says on the tin it would do. Does it live up to the superlatives spouted in the marketing material? Well, what you really want to know is what sets it apart.

According to the material it works on “The Physique-Altering Power of Peptide “Multi-Fractionation”ProNOS.” To be honest I have no clue what that means. What I’m concerned about is whether or not the product works. Do I get better results form using M.R.I. Pro-NOS?

Some would say it depends on what you’re comparing it to, and I would say they were wrong in any way. Obviously, the comparison has to play a big part in this picture. However, let me allay your fears. The M.R.I. Pro-NOS supplement is indeed one of the best supplements I’ve tried. Now, my advice to the M.R.I. marketing department is to stop coming on quite that strong. It’s probably not going to help that I tell them to, but that would be my advice. They have a really good product that I’m confident would do well even without the exaggerated verbiage. Those’re my two cents.

What else is there to say about it. It comes in several flavors. You do know those supplements with flavors that taste like shit right? Yeah. M.R.I. Pro-NOS is not one of them. Yeah it does have a flavor, but it’s not in any way too much or too synthetic. If you had any fears about that you don’t have to worry. I’m not saying it would pass muster at a gourmet restaurant, but as far as protein supplements are concerned it’s not bad.

Would I recommend the M.R.I. Pro-NOS supplement?

Based on the marketing material, I’d probably have to say no. However, I did decide to test it and I did get good results. If results are on your list of priorities you should go and get it.